The fighters received a warm welcome with a huge reception including a large crowd of media members in attendance and fans who eagerly waited outside the venue doors trying to get in or sneak a peak at their boxing heroes.

The successful Los Angeles press tour stop for Golovkin vs. Lemieux capped a week of exciting media events for the two middleweight champion fighters. On Tuesday, Aug. 18 in New York City, Golovkin and Lemieux took to the top of the famous Empire State Building to pose with their middleweight championship belts before ending the day with a packed-house at Chase Square at Madison Square Garden for the kick-off press conference.

On Wednesday, Aug. 19, the two fighters traveled to David’s hometown of Montreal, Quebec for the second press conference on the tour where both fighters were well received though Lemieux was clearly favored by the fans in attendance.

Golovkin vs. Lemieux will fight for the Middleweight World Championship Title Unification on Saturday, Oct. 17 at the Mecca of Boxing, Madison Square Garden. The championship event will be produced and distributed live by HBO Pay-Per-View beginning at 9:00 p.m. ET/6:00 p.m. PT. 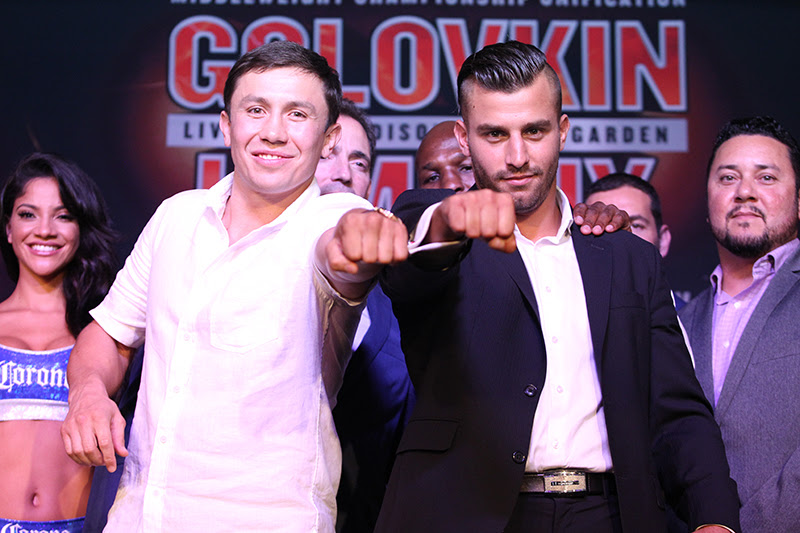 Below are what the fighters and their teams had to say at the final press tour stop in Los Angeles:

“I feel like I am home here in LA. This is the biggest present for fans. It’s an amazing time for us. Right now I am very excited and very happy.

“This fight has it all. Pay-Per-View, a title unification, and a great opponent. Like Bernard Hopkins said, this is an amazing time.

“I promise an amazing show. There are a lot of champions on this event with David, Chocolatito, and me on the card. Oct. 17 is the next part of the story. Everybody tune in on Oct. 17.” 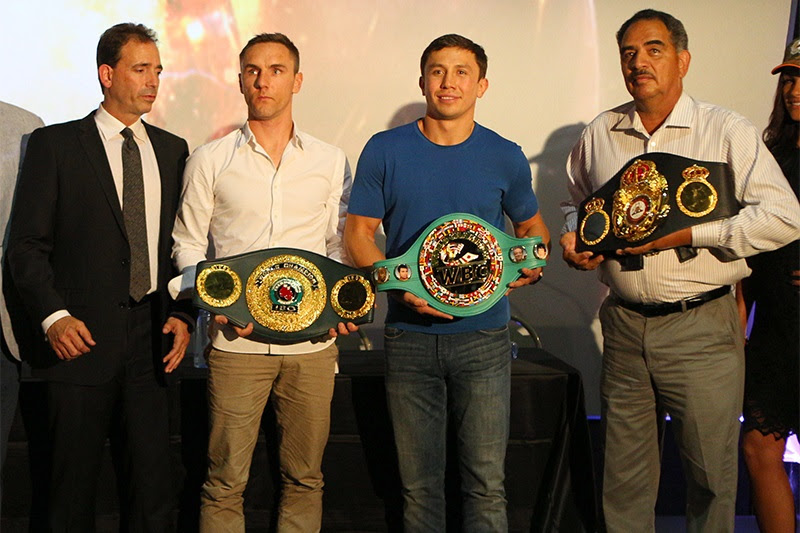 “Yes, I do believe that I can win on Oct. 17 against Gennady Golovkin. I don’t just believe it; I know what it takes to win. I’m going to this fight because I know how to win. I know how to do this because of my experience; I know my abilities, and I know myself inside and outside the ring. I’m here today because of my great determination.

“I’ve come a long way and I’m proud to be here today to fight the Goliath of the middleweight division. Gennady Golovkin is a good champion; he has good values. But, in the ring you’re not friends. It’s two pit bulls going for the neck.

“If there is any body up to the challenge to beat Golovkin, it’s me. Something great will happen on October 17.” 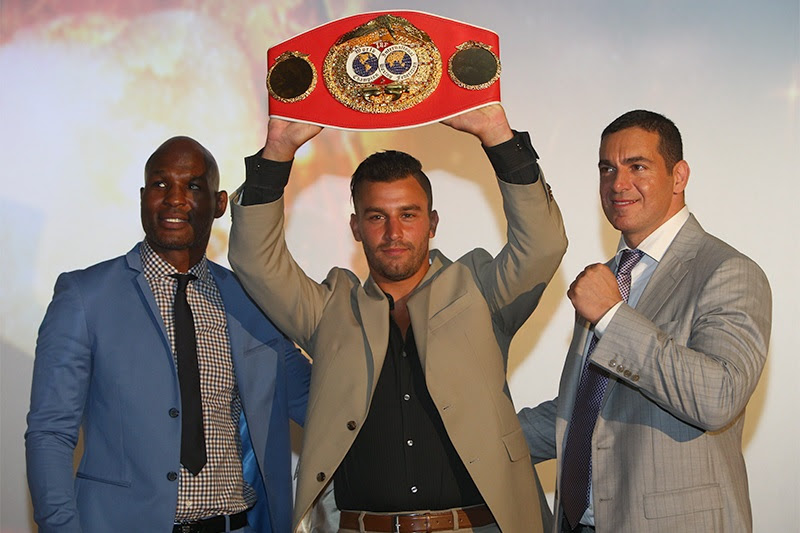 “This will be one of my best fights, and I am honored to fight on the undercard of a Golovkin fight once again.

“Everybody tune in October 17, and I will give one of the best fights ever and dedicate this fight to my family and fans in Nicaragua.”

“This is the biggest stage in my career. It’s far from fighting at the swap meet and clubs. October 17 is going to be a great night. To be in the ring with Roman Gonzalez, and the same stage as Gennady Golovkin and David Lemieux is an honor.

“I know we will have a great fight on October 17 for the fans. This is what I have been training all my life for. I’m training my butt off and I want to show the fans a great fight.

“This is very exciting. Today’s turnout in Los Angeles just proves this is a fight fans want to see. Boxing should be about the best fights.

“Thank you to Tom Loeffler at K2 Promotions. We made this fight in about three days. It was easy because both guys wanted to fight each other. These are the fights that are easy to make.

“This fight is kind of like David and Goliath. You have a real David, David Lemieux, who also had a slingshot when he was young. And you have Gennady Golovkin, the Goliath. Why did David (Lemieux) decide to fight the Goliath, Golovkin? Because he thinks he can win. That’s what is great about this fight. Another David took on Goliath thousands of years ago and he won. Greatness is achieved when you take on a difficult fight and you overcome to win.”

“David wants to be great. He doesn’t want to be a puppet and be told who he has to fight. He chose to fight Gennady Golovkin Goliath because he believes he can win.”

CAMILLE ESTEPHAN, President of Eye of the Tiger Management and Manager to David Lemieux:

“Champion has a true meaning. It’s about fighting the best and not about ducking fights for business. It’s about the fans.

“Thank you to the fans for their support. I anticipate this to be a difficult fight. David is a tough competitor. He proved that in his last two fights against Gabriel Rosado and Hassan N’Dam.

“David is a big puncher but so is Gennady. The fans will come out the winner on Oct. 17.”

“I’m so proud to be part of a promotions that generates such interest from everybody because we are giving the fans exactly what the want.

“We know David understand how big of a challenge he will face with GGG. You need to truly understand your opponent. David will face an amazing athlete on Oct. 17 and he will be ready.”

“Thank you to HBO for this opportunity. Madison Square Garden is one of the biggest venues in the world. We believe this will be a great fight just like Roman Gonzalez gave May 16. He is training to give you a great fight. We feel overwhelmed by this opportunity and thank the United States for welcoming Roman with open arms.”

“TV executives in the U.S. were unwilling to showcase fights below a certain weight on broadcast venues for a long time. Now, we have the best flyweights in the world set to fight on HBO Pay-Per-View. You’re not going to want to miss this fight. It’s a guaranteed barnburner. Both fighters will deliver Hall of Fame worthy fights. They don’t trash talk; they are gentlemen and do their fighting in the ring.”

“This double header is quite a card, and the WBC is very excited to be part of it.

“Brian Viloria is a former champion and will be a tough opponent so it will be a very exciting fight against Roman Gonzalez. There is much at stake with this fight.

“The WBC will order the winner of Golovkin-Lemieux on Oct. 17 to fight the winner of Cotto-Canelo. This is very good news for the sport of boxing. This is exactly what boxing needs.”

“There is no doubt Golovkin vs. Lemieux is a great fight. It’s a fight truly worthy of Golovkin’s entry to the Pay-Per-View stage.

“Golovkin is one of the greatest fighters in the world today, and he’s exciting to watch. Fans are going to get tremendous value from the Pay-Per-View because there is also a great co-main event with Roman ‘Chocolatito’ Gonazlez vs. Brian ‘Hawaiian Punch’ Viloria.

“For the fans that can’t make it to New York to watch this fight in person at Madison Square Garden, check out HBO Pay-Per-View. We are going to give you a great telecast on Oct 17.”

Tickets for GOLOVKIN vs. LEMIEUX are on sale now and are priced at $500, $300, $200, $100 and $50, tickets can purchased at the Madison Square Garden Box Office, all Ticketmaster outlets, Ticketmaster charge by phone (866-858-0008) and online at www.ticketmaster.comor www.thegarden.com.