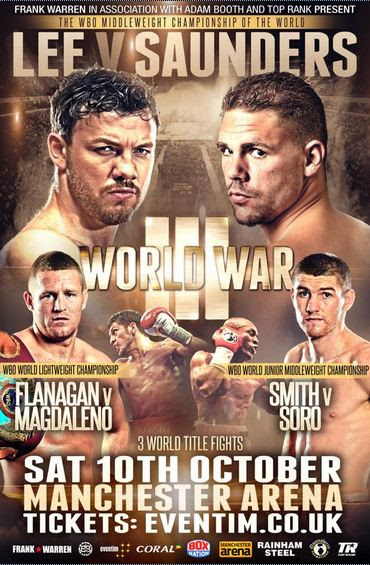 Andy Lee and Billy Joe Saunders will headline a massive triple world title bill on October 10 in Manchester following an announcement on Monday.

The talented middleweight pair, who were originally supposed to meet in Ireland a month earlier, will now top an eye-catching card at Manchester Arena.

Lee defends his WBO middleweight title against mandatory contender Saunders, whilst Terry Flanagan will also make the first defence of his lightweight version.

Magdaleno, who is represented by Top Rank, has put together a run of victories since suffering his only loss to Roman Martinez for the super featherweight title in 2013.

Also on the bill and rounding of the impressive treble, Liam Smith will challenge for the vacant WBO super welterweight title against European champion Michel Soro.

The 27 year-old, who has 20 wins and draw to his name, gets the chance to claim a first world title for his fighting family following recent defeats for older brother Paul at super middleweight.

BoxNation will televise the live event which will also feature interim WBA lightweight champion Derry Mathews putting his belt on the line for the first time.

Tickets for Lee v Saunders are on sale at Eventim here: http://bit.ly/1HRoptC