Said Moore, “I have never worked with such an incredible trainer. It’s all about being secure with constructive criticism and understanding that this man is here to take me to that championship level like he has done so many others.” 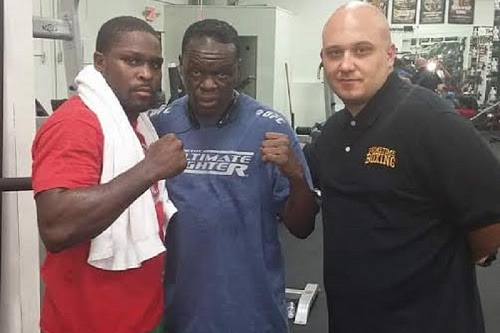 In a gym filled with talent, it could be hard to stand out in a crowd of so many fighters, but Moore has gotten the attention of not only his trainer Jeff Mayweather and strength and conditioning coach Delaney Howard. Recently a special guest came and gave some advice to Mike. Floyd Mayweather Sr. was walking around, and he jumped in the ring and starting giving Moore some of his wisdom.

Michael Moore is all about his family. He Google video chats with his wife and children up to three-times a day and absolutely hates being away from them. Moore has said on so many occasions he feels bad for whoever steps in the ring with him next because they are going to feel the pain that he has been feeling these past few weeks.

“Delaney has known me my whole life. He knows how to really push me to the next level and pump me up when I eel like I’ve had enough.This boxing game is no joke and its important to have a team around you that won’t let you stop & won’t let you give up. That motivates you to that championship level.”

Moore, 29 years old from Cleveland, Ohio, was an entrant in the Boxcino 2015 Jr. Middleweight tournament and will have an announcement on his next fight shortly.