Espinoza denies Mayweather delay is due to Showtime demands

According to Rafael, Showtime are asking for options on any future Mayweather fights, even though the pound for pound king has hinted that the final contest of his current six-bout agreement with the network will be his last.

Espinoza branded Rafael’s comments ‘absolutely false’ and added: “There hasn’t been a single conversation about an extension or future rights.” 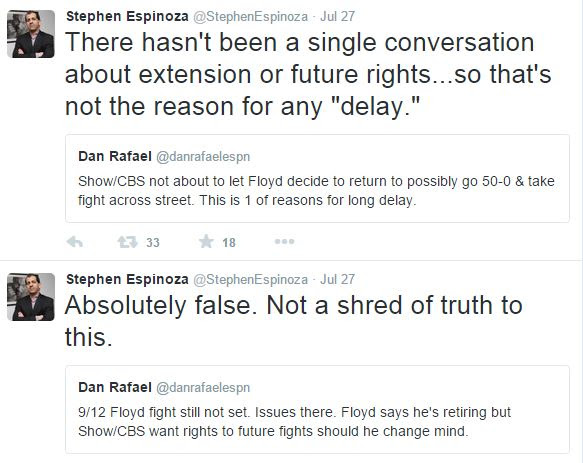 Mayweather, 38, is expected to confirm ex-WBC champion Andre Berto as his 49th and last opponent for a fall return in the coming days on a card that is rumoured to be heading to free-to-air TV on Showtime’s parent channel CBS.

As Mayweather has close ties with Al Haymon, there are further rumblings that the pound for pound king is set to see out his Showtime contract before switching his allegiance to the new Premier Boxing Champions format headed by the controversial figure.

Whatever the delay to an official announcement is, Mayweather is just over six weeks away from potentially hanging up his gloves, but may well go out in a shroud of controversy if Berto proves to be an easy a victory as many predict – PPV or not.