“Thank you to WBO. This was my first belt and mean a lot to me. Thank you for this ring.”

“Thank you for everybody that came here today. Thank you Kathy Duva my promoter, Egis Klimas my manager and Nadjib Mohammedi. I want to show this Saturday who I am. I would like to still be champion as long time as possible. I did not get all my goals in my career yet. My amateur career I didn’t give me a lot of opportunities. I was hurt in amateur career and I had to try not to closed doors. Some of my dreams in the boxing and my goals not finished. For my dreams, my goals this Saturday is the next step in my career.”

“Welcome to Mandalay Bay and thanks HBO. I want to give you good show. We will know who is the best. Thank you HBO who built my career. I love boxing and boxing in America and HBO is the best.”

“I cannot say who is the best. I try to be better with everyday to fight and build my career as I would like.”

“I am very excited and happy. Thank you Sergey Kovalev, Main Events and HBO. I have hard work in my training camp for this fight. I am very happy. I promise Saturday a good fight. I am ready. Thank you very much.” 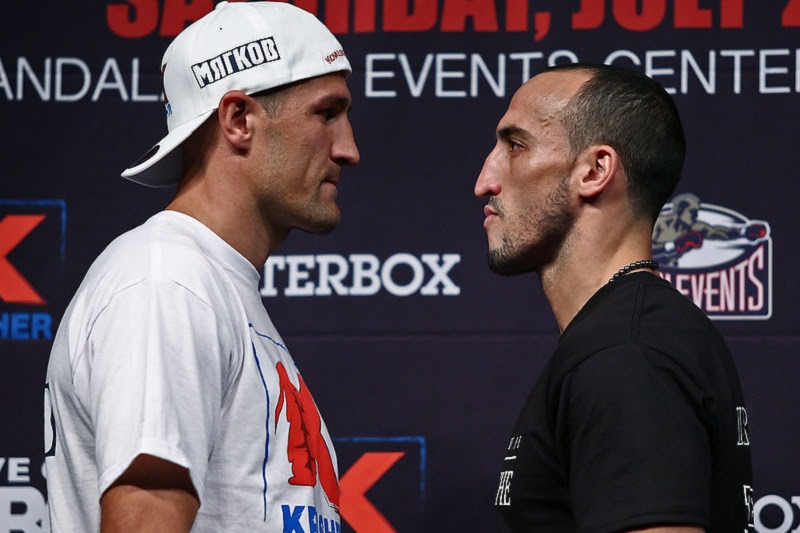 “Welcome to the beautiful Mandalay Bay. This Saturday’s HBO World Championship Boxing event will feature the light heavyweight champion of the world against Nadjib Mohammedi, the IBF mandatory challenger.”

“There has been a lot of discussion lately about where the best fighters fight. The place that has developed every major fighter in the last 30 years is HBO and that is why Sergey Kovalev is an HBO Fighter.”

“This event is going to be promoted with a group of great promoters. Krusher Promotions, Sergey’s promotional company, will be our new partner going forward. Our sponsor is Myagkov Vodka. It is so nice to be back here at Mandalay Bay. We have had a long relationship with Mandalay Bay going back to Fernando Vargas. It is in my view my favorite place in Las Vegas to come. It is associated with the great people at MGM International and my good friend Richard Sturm.”

“Our first time in Nevada was in 1981 when Sugar Ray Leonard fought Thomas Hearns. This is my first time working with the current commission here in Nevada. We are forging a good relationship with them. I want to thank Cisco Aguilar and Bob Bennett.”

“The first time Sergey Kovalev fought in Las Vegas it was on an undercard. Those fighters work just as hard as everyone else. We have a great undercard for this Saturday’s event and it is always fun to watch the undercard fighters because you never know if one of them could be the next Sergey Kovalev.”

“The opening bout on HBO World Championship Boxing telecast will feature Jean Pascal, the former light heavyweight champion of the world, against the undefeated Cuban Yuniesky Gonzalez. Pascal is truly a warrior in the best sense of the word. His promoter is InterBox and he also has his own promotional company, Jean Pascal Promotions.”

“We got to know Nadjib Mohammedi a year ago when he fought Anatoliy Dudchenko on one of our shows. He came in as the under dog and came away as the mandatory challenger.”

“I thank God every day for the day I met Egis Klimas and he brought me Sergey Kovalev. He has a great team around him. Sergey Kovalev’s trainer is a former world champion. I have known John David Jackson for a long time and he is one of the best trainers in the world.”

“Bernard Hopkins said to me that Sergey is getting better with every fight. He is powerfully fast and shockingly dominating. He is the kind of guy that people want to see. Hopkins warned Sergey not to get complacent. I think a mark of a great fighter is no matter what you do you are never satisfied and that is the best way to describe Sergey.”

“On behalf of the Nevada Athletic Commission, we are pleased and privileged to bring you this fight. We would like to thank Main Events, HBO, Richard Sturm and Mandalay Bay and last, but not least, we really want to thank the fighters because without them none of us would be here.”

“Welcome everyone. I want to thank the media, the fighters and the fans for being here today. We are excited to partner with Kathy Duva and Main Events for a championship fight on HBO. Fighting for only the second time in Las Vegas Sergey Kovalev will make his Mandalay Bay debut against Nadjib Mohammedi, the IBF #1 contender. The event will be an international one and the world will get to see these two great fighters represent their home countries. Thank you Main Events, Bob Bennett, HBO and thank you all for being here. We look forward to seeing you all Saturday night.” 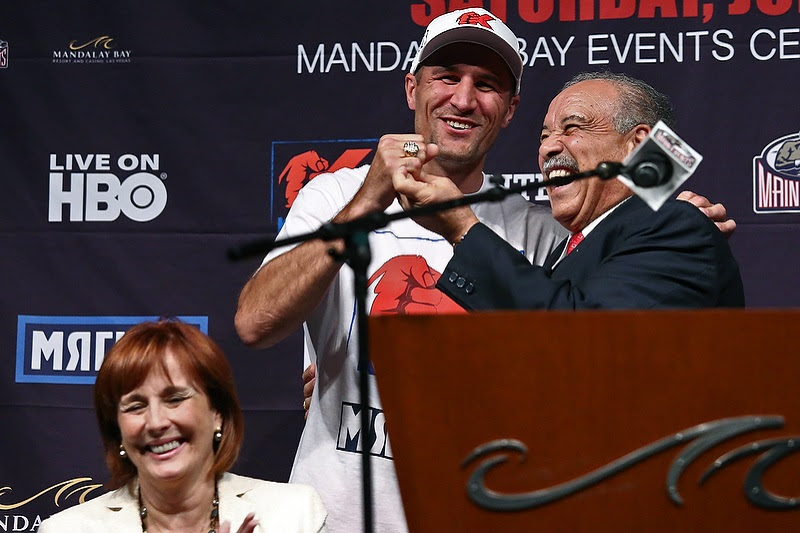 Kovalev Received a Championship Ring from Valcarcel of the WBO.

“Sergey Kovalev was a sensation. Sergey, we have something for you. He is a great human being. He is a great fighter, outstanding. You going to have a lot of excitement in this fight. We have a real diamond ring for him. This is something we give to our champions.”

“Good afternoon. First I want to thank Don Turner who gave me my first steps in boxing. He is the man who introduced me to this sport. He noticed Sergey and told me I had to sign him. Coming back to Vegas brings back a lot of good memories because this is where Sergey won his first belt. He won the NABA Light Heavyweight Title. We were celebrating here and he grabbed his belt, put a shirt over it and brought it downstairs. He said he wanted to give it to me. He gave it to me and said it was our title together. I still have it at my house, he never took it back.”

“I want to thank HBO and Nadjib Mohammedi for taking this fight, Mandalay Bay and media for coming for this good event. We are looking for one of the best fights in the light heavyweight division. When Sergey came to United States in 2009 the light heavyweight division was dead and nobody was talking about it. I strongly believe the division is burning today and that is because of Sergey. There is not a match in this division that happens without mentioning his name.”

“I am not going to talk too much. I am going to let Sergey do the talking in the ring Saturday night. But I was a WBO champion during my career and where is my ring, Paco? (laughing)”

“Enjoy the fight Saturday. It is will be a good fight.”

“I think Sergey Kovalev is in the top five fighters pound-for-pound and he can become #1.”

“Nadjib Mohammedi, a lot of people didn’t know who we were not too long ago. After Saturday he will be known everywhere. I can make two guarantees: He will weigh 175 pounds tomorrow on the scale and he will have the best game plan possible. That is because of Abel Sanchez, who I believe he is the best trainer in the business. When Nadjib’s trainer couldn’t make it into the country back in November, I had the chance to call Abel to step in. It is like putting sugar in the Duncan Hines.”

“I have been around a lot of fighters and I know heart when I see heart, and determination when I see determination. I know all the intangibles fall on Sergey Kovalev’s side of the table but I am going to ride this guy [Nadjib] all the way to the championship. We love the IBF and thank them for this opportunity. Nadjib Mohammedi is Saturday’s challenger but he will be Sunday’s champion.”

“I would also like to thank all the media here today. I didn’t hear one negative word spoken about Nadjib. Not one media person in this building did that and I thank you.”

“I am glad to be here with my brother, Nadjib Mohammedi. I am very proud of him. Back in France he came a long way to get here. Saturday night will change his life forever.”

“I want to thank Mandalay Bay, Peter with HBO, Sergey Kovalev and Egis Klimas for this opportunity. Nadjib earned this right by moving up the ladder to become the #1 contender. I believe we are fighting the best light heavyweight in the world. We know we are fighting a very tough guy. I hope everyone enjoys the fight.”

“Hi everybody. There is no place like home. I have been fighting at home my whole career. I am glad to be in Vegas, it is my first time fighting here. Every fighter on my level wants to fight at least one time in Vegas. This is my chance to make a statement on Saturday night. I know am still among the best in the world and best in my division. I know Yuniesky Gonzalez is hungry and he wants to make a statement. I want to give you guys a great show on Saturday night.”

“My philosophy is the best must fight the best. I believe I am still among the best in the world. I am the best light heavyweight in the world but I had a bad night on March 14.” 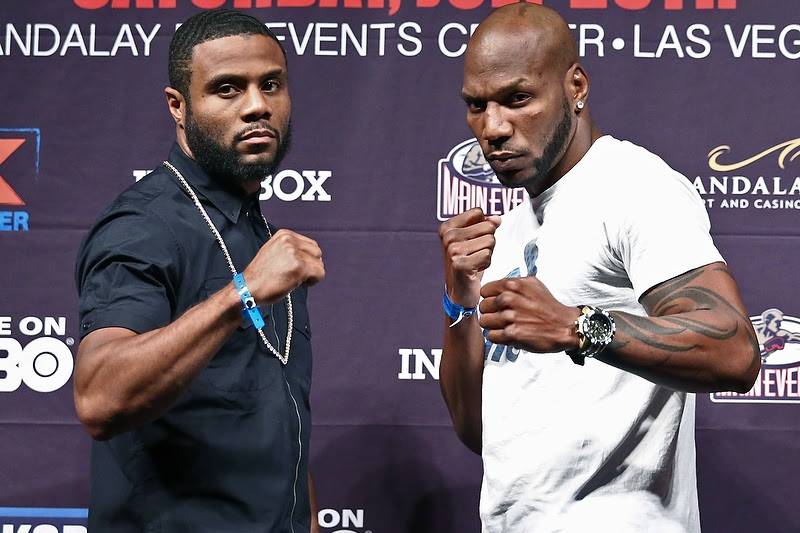 “Good afternoon. Thank you to Jean Pascal team, HBO and Joe DiGuardia and Kathy Duva of Main Events for this opportunity. Gracias. We are going to see high quality boxing from Yuniesky Gonzalez Saturday night.”

“Good afternoon. InterBox has been one of the lead promoters in Canada for a long time but this is our first time in Vegas, so this is a great thrill for us. Thank you to HBO, Kathy Duva and Main Events for having us here. Following Jean Pascal’s fight with Sergey Kovalev one of Pascal’s requests was to step back into the ring as soon as possible. We are so happy to make this happen for him. You are going to see a very exciting fight on HBO. Jean Pascal is a former light heavyweight champion. Kathy Duva described him as a warrior. This is going to be a long and very difficult fight for both fighters.”

“Good afternoon I want to thank HBO, Peter Nelson, Main Events and Interbox for being such great people to work with. For Jean Pascal this fight is about him making a statement in his Las Vegas debut. He is going to let his fists doing the talking on Saturday night.”

“Thank you for being with us today. After the fight with Sergey Kovalev, Jean Pascal requested a fight right away on HBO with the best opponent available. With the style of both fighters we are going to have a great fight. We had a great training camp and it should be a great fight Saturday night.”