In this week’s updated WBC rankings, the Olympic gold medallist stands at the lofty number two position and only has mandatory challenger and former world champion Alexander Povetkin ahead of him. This means that once Wilder and Povetkin go head-to-head later this year, the 25 year-old will then be the next in line to face the winner in a contest that will be stipulated to take place by the end of 2016 unless promoter Eddie Hearn possesses another blueprint. 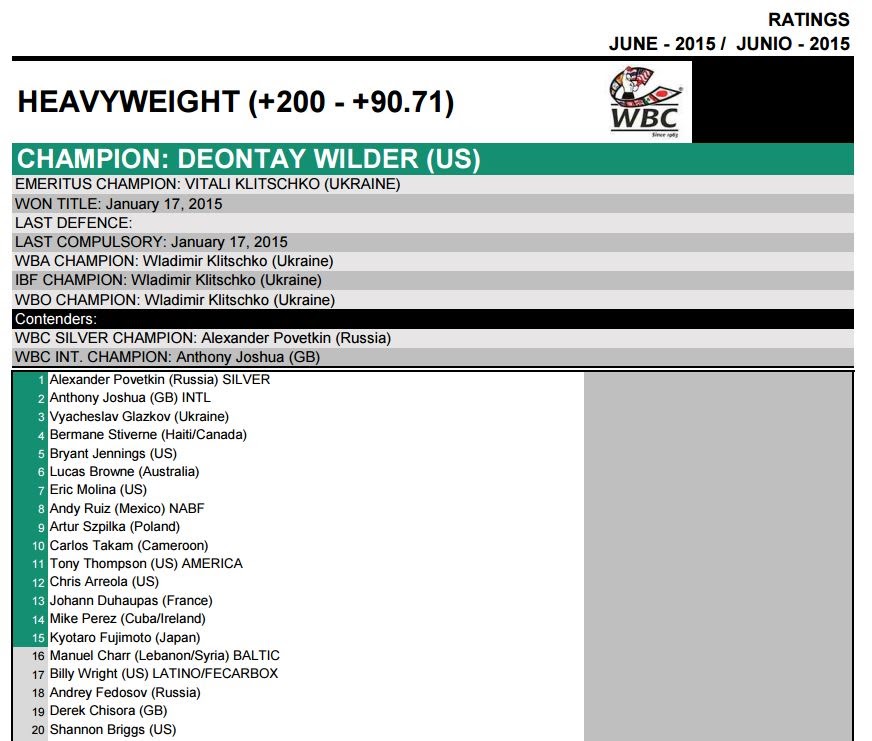 Joshua has so far demolished all opposition put in front of him since turning pro on the back of his London 2012 success, in much the same ilk as Wilder did when he exploded onto the scene with a string of early KO’s back in 2008. Wilder, 29, would eventually stop 32 foes straight within four rounds until dethroning stone-headed Bermane Stiverne in January to begin what the Tuscaloosa fighter hopes will be a long and glorious reign as America’s first world title holder in years.

Londoner Joshua may yet have a part to play in how long that stint as champion lasts for Wilder though, and having beaten all 13 of his challengers within three rounds, is nailed on to be involved in a title fight as soon as Hearn lets the bruiser off his tight leash.

Manchester is the next venue for Joshua’s continued progress on July 18 as ‘AJ’ looks to build on becoming the first ever fighter to stop Kevin Johnson in his previous outing. Joshua blew out the elusive veteran impressively in just in two rounds last month at Wembley Arena and it’s just a matter of time before the big names come calling.