Throwdown Fantasy and World Boxing News were very visible at FoxSports 1’s popular LA Fight Club boxing series installment last June 4, giving its members a whole new level of boxing experience by letting them score the fights in the comfort of their homes and enabling them share their scores with boxing friends via social media.

This feature is one of the latest innovations of the Compubox-powered fantasy boxing game which makes it fun, exciting and user friendly. It was stated very clearly stated by the broadcast team that the fans scoring on throwdownfantasy.com  had more accurate scorecards than the judges overall in their opinion.

One of the salient features of ThrowdownFantasy.com is The Live Fight Centralwhich can be accesses in its homepage. Under this feature, registered users/players can keep track of real-time fantasy stats as the actual fight happens so that they won’t miss a single point added to their team totals. At the same time, players can also get more interactive by scoring the fight themselves and sharing their scores with friends and game rivals. At the end of the fight, Throwdown Fantasy comes up with the aggregate fan scores, which in reality becomes the voice of the crowd and you can compare it with the actual scorecards of the real judges. Now judging the fight yourself won’t win the bout for your fighter, but at least we’ll know how the rest of the world saw the fight and not just hear the verdict seen from the six eyes of three judges.

Here’s a how Live Fight Central would look before the fight: 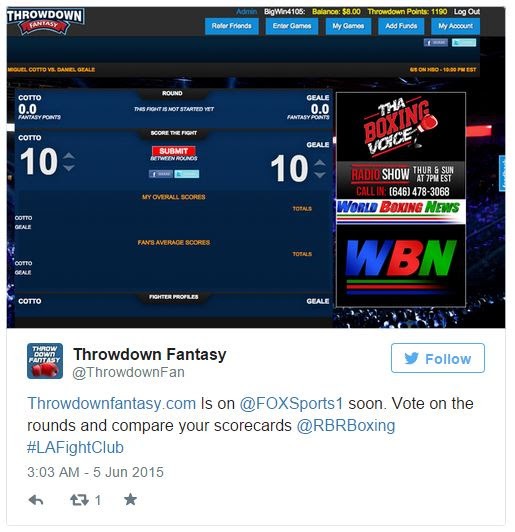 Let us explain this screen a bit. On the upper left and upper right portion of Live Fight Central, you can view the real-time fantasy points scored by each fighter. In between those two is the Round information so you will know where the fight is at. Below those, you can see a sample score of 10-9 in that tweet, with drop down/up arrows beside each score. In between the scores are the button “submit” and the social media icons to share your round scores. On the third row is your cumulative score for the fight and on the fourth row is the average score of the fans or the voice of the crowd.

The Voice of The Crowd

Before each fight, Throwdown fantasy made a call to attention via its official twitter account @ThrowdownFan. Below are samples from June 4, where it was tweeting to its members to join Live Fight Central:

Unfortunately, we couldn’t get the screenshots and videos for all of last week’s fights. However, we got both for the featured bout of the night, which is also part of Throwdown Fantasy’s current games:

Jayson Velez-Daniel Ramirez was an exciting and action-packed fight no matter what the scores were. Anyways, after the fight, FOX Sports flashed the Compubox Punch stats and the Fans’ Score or The Voice of the Crowd before the verdict was announced. Here’s how it went on live TV:

Cool stuff right ? Who says now that the voice of the people is unheard in boxing? It is now, courtesy of Throwdown Fantasy.

The judges scored the bout 99-90, 98-91 twice with Jayson Velez winning by unanimous decision. And our score was spot on 99-90. Impressive? Well that just shows the quality of players who have joined Throwdown Fantasy. Those folks know their boxing very well, so if you want to test your boxing IQ with them,  Throwdown now!

As for Jayson Velez and Daniel Ramirez, here’s how both scored in that fight:

Great if you picked Velez on your team because those 83.1 are big fantasy points especially since he did not knock out Ramirez. For those who picked Ramirez as one of their underdog, his 126 punches connected were a consolation. Not all losing fighters can score 12.6 points especially is he lost by that wide margin. Well so much for that fight and on to the next ones because Throwdown Fantasy has a whole lot more coming.

Live Fight Central went on air again last Saturday as the  #CottoGeale $4K Throwdown game continues with some of its matches, including the featured Miguel Cotto-Daniel Geale middleweight showdown at the Barclays Center. What did you think of that fight? That’s another story.

So what are you waiting for? Get interactive with the sport you love at  Throwdown Fantasy Boxing. It’s free to join and there are free games if you want to give fantasy boxing a shot. The word is out and testimonials are starting to come in: