Former ruler Calzaghe, who hung up his gloves undefeated on 46-0 in 2008 following a stellar career, never fought Froch despite repeated call-outs by a then up and comer, although the pair have always had a notable despise for one another.

Upon DeGale claiming a career-defining win on Saturday to capture the belt Froch vacated rather than face him for, Calzaghe couldn’t help but have a pop of his own before barbs were fired in both directions by the compatriots.

Froch, who is now title-less after also losing his WBA belt, fired back by saying; “You didn’t fancy the job!” to the Welshman, although that wasn’t the end of the argument. 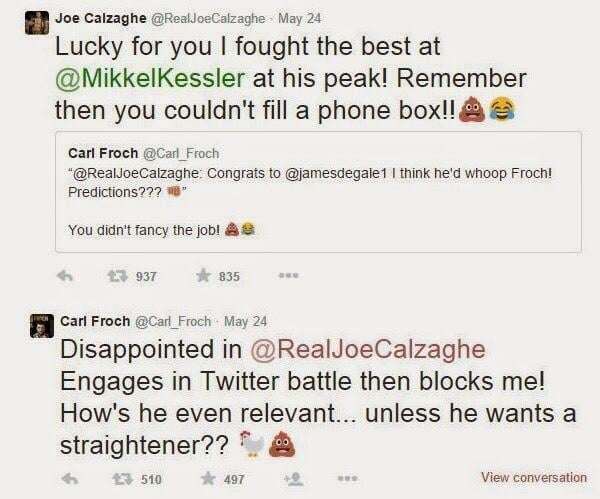 Calzaghe then pointed out that he fought and defeated Mikkel Kessler when the Dane was in his pomp in 2007 and went further by stating the Froch ‘couldn’t fill a phone box’ at back then as he struggled for TV coverage.

The end came when Froch expressed his disappointment in Calzaghe for the exchange and then revealed that the long-time WBO title holder blocked him on the social media site.

This one threatens to run and run, but has no possible end due to Calzaghe’s happy retirement.