Despite Hatton losing to both towards the end of his ring career, the now-trainer was looking forward to the fight on May 2 as much as any fan. But upon witnessing some comments on social media, the fan-friendly ‘Hitman’ was obviously not amused as his response suggested.

“Some t**s on here. If you think that was a good night for boxing and we all got value for money then you need to check your boxing knowledge,” said a frustrated Hatton.

“Yes, they both knocked me out but the prices, the entertainment value of the fight and no mention of an injury beforehand, if that was good for our sport then boxing should get there new reporters and pundits from Twitter!” 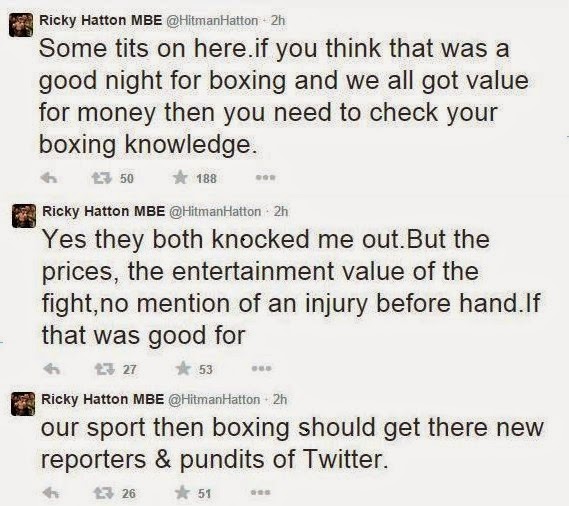 The half a billion dollar pay-per-view event has faced fierce criticism in the wake of Pacquiao admitting that he went into the contest with a shoulder injury that ultimately hampered his ability to perform at his best when losing on points to Mayweather.

Since then, fans and bars in the US have filed lawsuits against Pacquiao and his representatives in a bid to gain damages for the deception as plenty of those involved in the bout knew about the problem before the first bell rang in anger.

The views of a great ex-fighter like Hatton are not uncommon in some quarters and talk of a potential rematch has been scoffed at by a section of the boxing fraternity who believe there is nothing left to see between the two best boxers of their generation.