The self-professed ‘Best Ever’ laid out $350,000 on a total of four wagers, including a $50,000 stake on middleweight champion Gennady Golovkin to defeat Willie Monroe Jr in under five and a half rounds.

Seeing as referee Jack Reiss pulled Monroe out 45 seconds into the sixth round following a systematic breakdown by the Kazakh puncher, ‘Money’ walked a away with a $65,000 gain after banking $115,000 in returns. 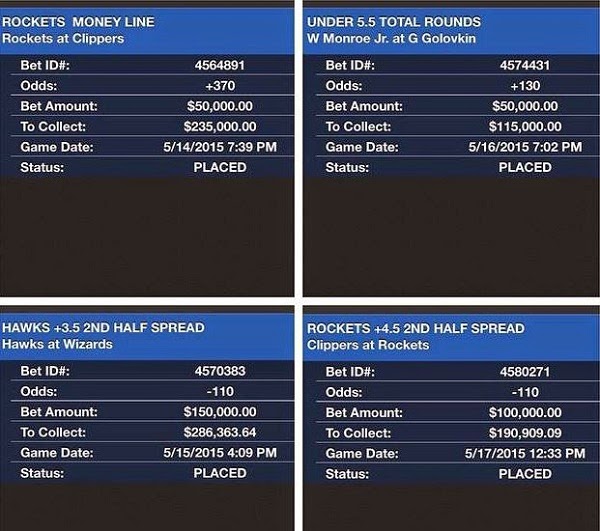 “The last four days have been great. I’m getting paid while watching others entertain and perform. I don’t do anything for free. I bet $350,000.00 and walked away with $827,272.73,” proclaimed a satisfied Mayweather.

The five-weight world title holder’s win comes just two weeks’ on from Mayweather receiving upwards of $250 million for just 36 minutes in the ring against rival Manny Pacquiao on May 2.

Pay-per-view sales could top over five million, according to Mayweather himself, as the super-rich American pushed his outstanding record to 48-0 with a unanimous points win over the talented Filipino.