Kalle and Nisse, announcing on their social media account, claim Chisora was sent a ‘very good’ offer for a Merseyside clash with Price, but that they will now move on after ‘Del Boy’ failed to get back to them with a definitive answer.

Shortly afterwards, Chisora tweeted back to the brothers and in no uncertain terms disputed the claims. 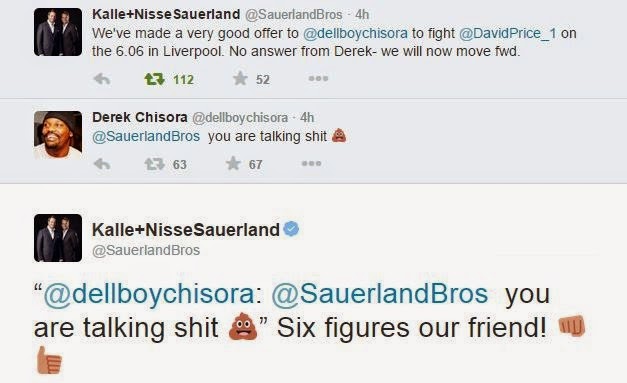 Rumours have been circulating for some time now that Chisora was the main target for Price’s return to the UK after the Olympic bronze medallist rebuilt his career in Germany and Denmark following back-to-back losses against Tony Thompson in 2013.

Three stoppages and a first career ten-rounder later, all against opponents with winning records, have seen Price feel confident enough to return home against a big-name foe, although at this point in time it looks like Chisora may be off the table.

Chisora, 31, is facing a rebuilding job of his own following a punishing defeat to Tyson Fury in November and may see stepping in with the likes of Price too soon after suffering a fifth career reverse against the WBO mandatory challenger.

Price, also 31, is set to move on in search of a suitable headliner for his long-awaited return to the scene of his disastrous double disappointment against Thompson at the Echo Arena – as Chisora plays hardball over a potential domestic battle.