It’s a widespread fact that Jake LaMotta is a true legend of the sport.

The 93-year-old amassed an astonishing record of 83 wins, 19 losses, and 4 draws through his 13-year career.

Winning the world middleweight title in 1950, LaMotta even had an Oscar-winning movie written around his saga with the fighter most call the greatest pound for pound of all time, Sugar Ray Robinson.

The film saw Hollywood icon Robert DeNiro earn high praise for his portrayal back in 1980.

LaMotta first fought an undefeated and seemingly invincible Robinson in October 1942 at the awe-inspiring Madison Square Garden in New York. They shared a pulsating ten rounds that ultimately saw the New Yorker out-pointed despite putting Sugar Ray down in the very first round.

The pair staged a rematch due to public demand four months later. Robinson had fought four times in the interim to take his record to an impressive 40-0.

In arguably their most intriguing fight, LaMotta famously knocked Robinson through the ropes in the eighth round. He subsequently completed his one and only victory over his nemesis following ten bruising rounds.

Robinson had suffered his first-ever defeat to the man that would become his greatest rival.

The dogged LaMotta had proved that on his day, and with the right focus, he could live with any fighter on the planet.

LaMotta would go on to lose a decision to make it 2-1 to Robinson, though. The fighters then cooled off their rivalry for a two-year spell.

Although they fought three more times over the next eight years, LaMotta just could not repeat his feat of February 1943.

Despite the highly-talented Robinson sharing a total of 65 rounds with LaMotta, he could never manage to knock the stubborn mule down. 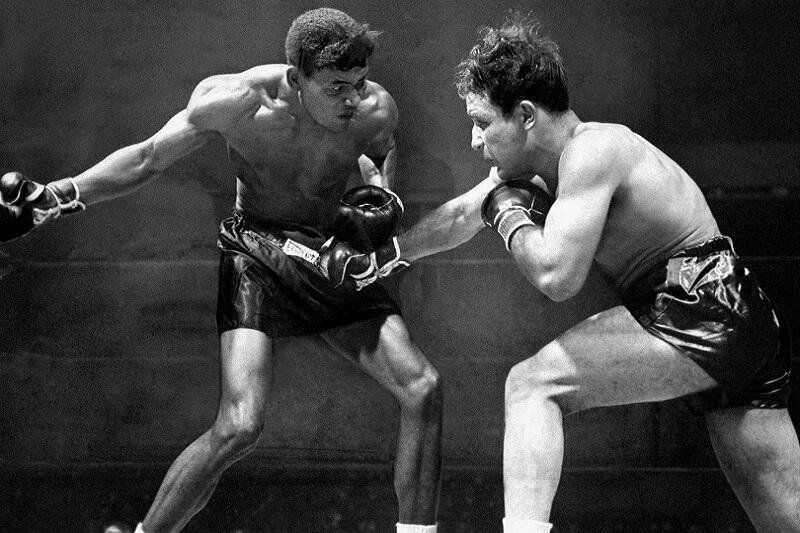 Their final clash in 1951, the only fight they ever held for a world title, was famed for LaMotta’s ability to soak up rounds and rounds of punishment from Robinson. Eventually, the contest was stopped in the thirteenth session to save LaMotta from serious injury.

Subsequently moving up to light-heavyweight, LaMotta was never the same fighter after that beating by Robinson. He saw out his career in 1954 at the age of 33. The end came two years on from his only genuine career knockdown against Danny Nardico in 1952.

The man waged wars in the ring. ‘The Raging or Bronx Bull’ was never one to back down from a challenge.

His down-right refusal to quit was one of the traits that led so many to find his story so encapsulating.

I for one will never forget the day when I had Jake LaMotta’s full attention for a few moments of his astonishing life.

In a conversation that will live long in my memory, I began by asking Jake how he was, which instantly led to LaMotta joking: “I’m in pretty good shape, but I’m an old man.”

Going on to question Jake on what he thinks about the state of boxing these days and how he compares the best fighters now to his time in the sport.

“There aren’t any fighters in particular that I like today. I don’t really watch fights because there are not many good matches.

“There are no contests. I used to watch all the fights. But I don’t really watch them anymore.”

When invited to recall his greatest memory from the time he spent in the ring, I deep down already knew the answer.

Jake LaMotta wanted to clarify in his own words and he didn’t disappoint.

“When I beat Sugar Ray Robinson for the first time in my life. We had six fights. I’m the first one to beat him, so that’s my greatest memory,” he said.

Jake then turned the tables on me and asked me a question of his own; “How old are you?” said LaMotta, I then said, “I’m 35.” Jake once again proved his sense of humor was still in full effect by calling me an ‘old man’ myself – before chuckling.

Professing to be a big fan of his, Jake was humble in his response but obviously grateful to hear the praise.

Beginning to wind down the chat as to not take up too much of his time, I confirmed that I would write up a story and send it to his wife Denise, whom he married in 2013.

Jake signed off with a final reply: “I hope you do a good job. Thank you and God bless. Goodbye.”

Ending the call with a beaming smile, but not without a couple of shaky hands, it was amazing for me to reflect on how much the man I’d spoken to had actually achieved in his life, and yet he was still so humble.

He went out of his way to make me feel at ease. This was a testament to a man who we should celebrate thoroughly as one of the all-time greats.

There will only ever be one ‘Raging Bull’ in the legendary Jake LaMotta. A true fighting man of the world that nobody, not even the best there ever was, could ever keep down.