The pair have been linked to a high-profile battle for some years and now finally come together following some heated debate in the weeks leading up to the New York encounter.

Martinez, 39, puts his coveted strap on the line against 33-year-old three-weight world champion Cotto as the Puerto Rican hunts for that supreme status of holding recognized belts in four divisions.

On paper, the two look quite evenly matched, although if you asked me the same question three years ago, there might well have only been one winner as Martinez was at the peak of his powers back then. After suffering injuries later in his career, the Argentinian is not the force he once was. Cotto will be looking to capitalize on this and etch his name even further into the boxing annals.

Both can bang and have lost considerable movement in their advancing years, so it’s fair to say we can expect toe-to-toe collisions at points in the fight – with Cotto making most of the running as Martinez gets in with his shots and back out again sharpish. 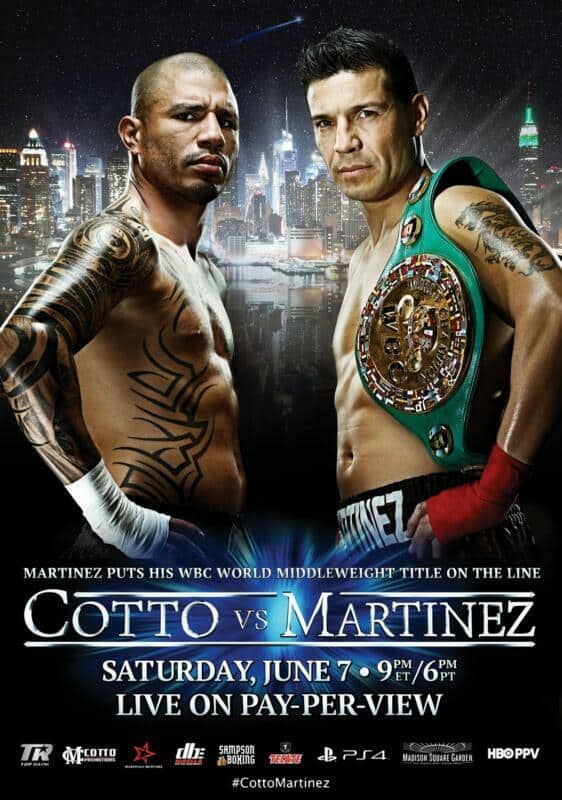 It’s not often that I can’t pick a clear winner after witnessing the pre-fight build-up, but unfortunately, this has been the case with this one. My head is leaning towards Martinez, although I keep thinking back to his last performance against Martin Murray, which makes me believe Cotto may pull off the victory.

I have tried to have some sort of prediction ready as I knew this write-up would have to be done, but between Sergio Martinez and Miguel Cotto, I won’t be able to pick out a winner until I see the demeanor of both fighters in the ring.

A twelve-round fight is certainly on the card, in my view, but we could be looking at a close-run decision on the cards, or whisper it quietly, an ill-fated draw. Bring on the rematch already!