At 35, the one-time pound for pound best in the world is ready to silence those questioning whether his career is truly on the wane. Manny Pacquiao is set to defeat one of the toughest 147lbers on the planet in Timothy Bradley.

Having already taken apart Bradley once, and in the process leaving him bruised and injured, Pacquiao is in the unusual position of having to right one of the worst judging decisions in the history of the sport.

Back in June 2012, Pacquiao scored a decisive 10-2 victory on my scorecard, only to see judges Duane Ford and CJ Ross come back with identical totals of 115-113 for Bradley.

I had already written half of my story entitled: ‘Pacquiao scores wide points win over Bradley in Las Vegas’ when I was forced to scrap it for another of total disbelief.

Pacquiao now has to put in a repeat performance at the same MGM Grand venue as the world watches to see how the fight is scored. if indeed it lasts the distance.

Hints of knockouts from both fighters have filled the pre-fight build-up. But both are aware that extra scrutiny will be afforded to ensure the correct verdict is handed to the rightful winner.

For me, the experienced Pacquiao still has all the attributes he possessed in the original meeting. He can certainly cause all the same problems he did to Bradley over the first twelve rounds two years ago. 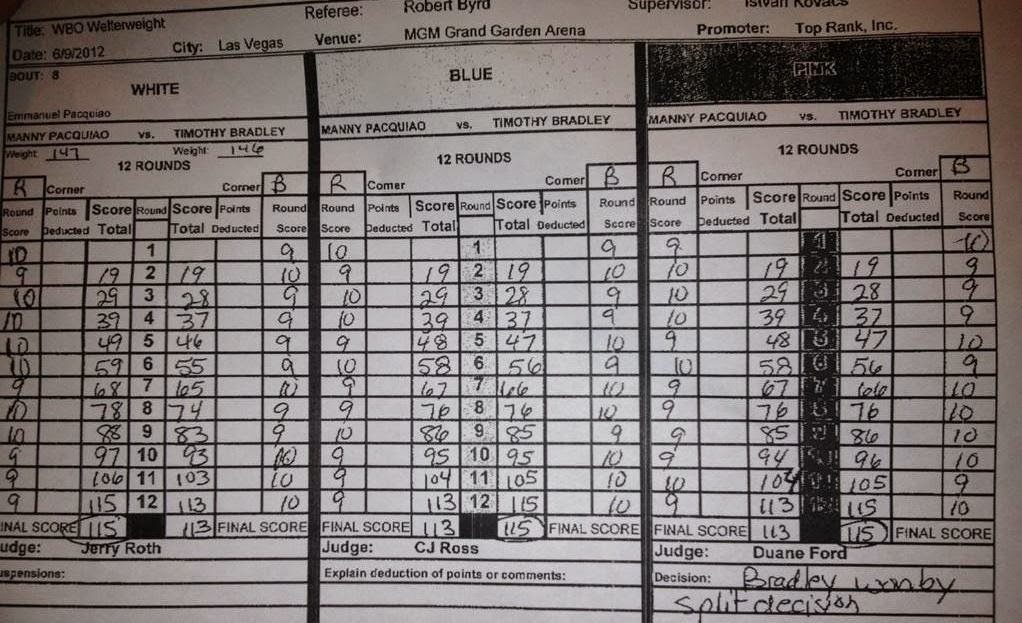 Bradley seemed to struggle to deal with Pacquiao’s punching angles beforehand, something which may well be his undoing once again unless he can drastically change his strategy to suit.

The way the American puncher had fought against Ruslan Provodnikov a year ago will only result in an early night for all concerned. Something close to the way Bradley fought Marquez will definitely be the order of the day.

Even against Marquez, I struggled to have Bradley a clear winner. The Mexican had solid claims to be handed the result as ‘Desert Storm’ continues to live a charmed life with the Las Vegas judges.

I favored Pacquiao previously to sweep aside Bradley and move on. Although the ‘Pacman’ was robbed of a victory that could have in-turn saved him from a bad knockout against Marquez in their fourth contest.

I’ve seen nothing from Bradley since to suggest he can even get close to putting another dent in Pacquiao’s CV. Certainly not in the first bout.

All being well ringside in Nevada, we should see the appropriate result this time around, barring a stoppage.